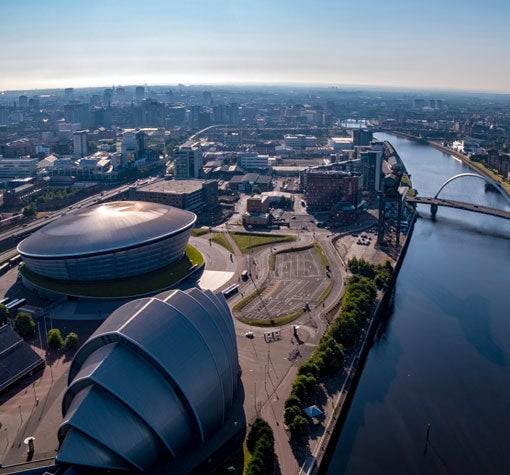 GLASGOW CROWNED AS THE UK’S TOP CULTURAL AND CREATIVE CITY

Glasgow has been named the UK’s top cultural and creative city as part of a landmark report by the European Commission.

The report puts Glasgow ahead of London, Bristol, Brighton and Manchester which make up the rest of the top five in the UK. Edinburgh is ranked 6th in the list. As befits the city’s ‘People Make Glasgow’ slogan, the report also ranked Glasgow as Europe’s leader for ‘openness, tolerance and trust’.

The Cultural and Creative Cities Monitor 2019 report looked at 190 cities from across 30 European countries and ranks 29 different aspects of a city’s cultural health, including its cultural vibrancy, creative economy and ability to attract creative talent and stimulate cultural engagement.

The report states: “Glasgow was one of the first European Capitals of Culture, in 1990. Known as an industrial city, it has now gained recognition as a creative and cultural centre of European importance.”

Dr Bridget McConnell CBE, the Chair of Glasgow Life, said: “We always knew Glasgow was a global cultural leader and we’re delighted that the European Commission has confirmed our position of the UK’s leading cultural and creative city.

“Glasgow is a city bursting with energy, passion and creativity and filled with artists, designers, creators and innovators. We have world-class museums and galleries, incredible architecture and history and as a UNESCO City of Music, there’s nowhere better to enjoy a gig. A focus for the performing arts and a hub for the creative industries, it’s no wonder that we’ve come out top of the ranking.

“What’s more, our openness, tolerance and trust has been rated as the best in Europe, confirming what we already know, that our people make Glasgow the best city in the world.”

More people visit Glasgow’s museums each year than in any other UK city outside of London, with both Kelvingrove Art Gallery and the Riverside Museum attracting more than 1.3 million visits each in the last year. The city is also investing £66 million in a full refurbishment and redisplay of The Burrell Collection, which is set to re-open to the public in 2021. Glasgow’s nine city museums are home to Europe’s largest civic arts collection, with masterpieces by Dali, Van Gogh, Degas, Renoir, Whistler and Monet as well as stunning works by the Glasgow Boys and the Scottish Colourists – all on show for free in the city’s museums. In terms of contemporary art, Glasgow has no fewer than eight Turner Prize winners and 12 nominees who have hailed from, trained in, or worked out of the city in recent years.

The city is also the place to come to admire the genius of architect and designer, Charles Rennie Mackintosh, or a gig at the OVO Hydro which in 2018 was named the world’s best performing music venue by size, or to enjoy shows by trailblazing companies such as The Citizen’s Theatre. Glasgow is also home to a year-round calendar of major cultural events from the UK’s biggest Mela to the Merchant City Festival and the World Pipe Band Championships. Every January, the city’s Celtic Connections festival welcomes more than 2,000 artists from across the globe to take part in some 300 events on 35 city stages as part of an incredible celebration of traditional and folk music. The city is also home to the Glasgow Jazz Festival, Glasgow International Comedy Festival and the Glasgow Film Festival.

Dr McConnell added: “We’re proud to have a huge and diverse cultural offer that’s open to everyone, whether that’s enjoying a community pantomime in venues across the city or being inspired in our world-class museums. We also recognise that we need to invest in our cultural legacy and we are doing just that with a £66 million refurbishment of The Burrell Collection. I have no doubt that when we once again reveal Sir William’s incredible gift in its new home, Glasgow’s cultural credentials will be lifted to even greater heights.”

Work is progressing on a new Culture Plan for Glasgow which will set out ambitious new targets to build the city’s reputation as globally recognised creative and cultural world city, with citizens at its heart