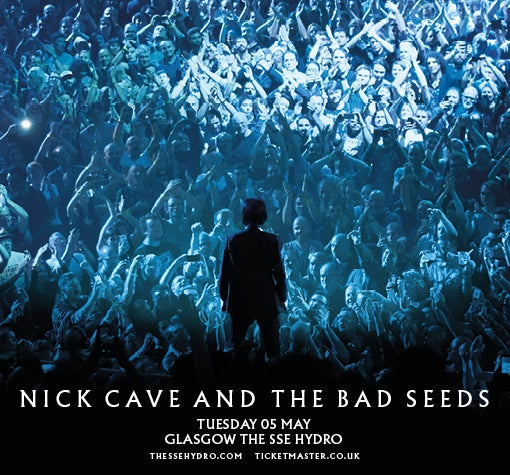 Nick Cave and The Bad Seeds

Nick Cave and The Bad Seeds have announced a Spring 2020 European and UK tour.

Regarded as one of the world’s greatest live acts, the band will perform in 19 countries including 6 shows in the UK.

On Nick Cave and The Bad Seeds Live:

"Joyous and unexpectedly triumphant”  - The Guardian ★★★★★
“Tense and thunderous at times, tender and cathartic at others. It’s masterful” - The Independent ★★★★★
“An extraordinary response to the unimaginable” - The Telegraph ★★★★★

Nick Cave and The Bad Seeds' seventeenth studio album Ghosteen was released digitally on 4 October, and has been widely received as their best work ever. Vinyl and CD will be released on Friday 8 November.

“...Stunning double album that sets desperation against empathy and faith. On one level, it shouldn’t be surprising that it’s as good as it is...Nevertheless, listening to Ghosteen, it’s very hard indeed not to be taken aback”  - The Guardian ★★★★★
“Fantastical splendour” - The Times ★★★★★
“Grand in design and filled with rare beauty and profound, poetic lyrics” - The Sun ★★★★★
“A masterpiece of melancholy” - Rolling Stone 4.5 ★★★★

Purchases are limited to 6 tickets per person.

Authorised ticket agents for this event are: AXS, Ticketmaster, See Tickets, Eventim, The Ticket Factory and Ticket Scotland and these Ticket Agents’ official resale platforms and Twickets. You risk not getting in if you buy from anywhere else.

ANTI-TOUTING MEASURES:
To prevent ticket touting, the name of the ticket purchaser will be PRINTED on all tickets purchased. This person MUST attend the concert. They will be asked to present matching PHOTO ID to gain entry to the venue.

IF THE ID DOES NOT MATCH, ENTRY MAY BE REFUSED. DO NOT FORGET YOUR PHOTO ID!

RESALE RULES:
Ticket resale is permitted at no more than the price you paid (i.e. face value + booking fee).
Please only use our authorised ticket sellers and resellers AXS, Ticketmaster, See Tickets, Eventim, The Ticket Factory and Ticket Scotland.
Selling tickets through unauthorised resale platforms will breach our terms and conditions and those tickets may be cancelled.
Viagogo, StubHub or any other secondary ticketing websites are not authorised resale platforms for this event.

If you buy your tickets through one of the above authorised ticket resellers make sure the new name will be printed on the tickets, otherwise you may be refused entry.

OTHER IMPORTANT INFO:
Each person wishing to enter the event requires a valid ticket. All tickets are a revocable license.

We reserve the right to cancel tickets purchased by businesses, traders, or persons acting on their behalf, who engage in the commercial resale of ticket.