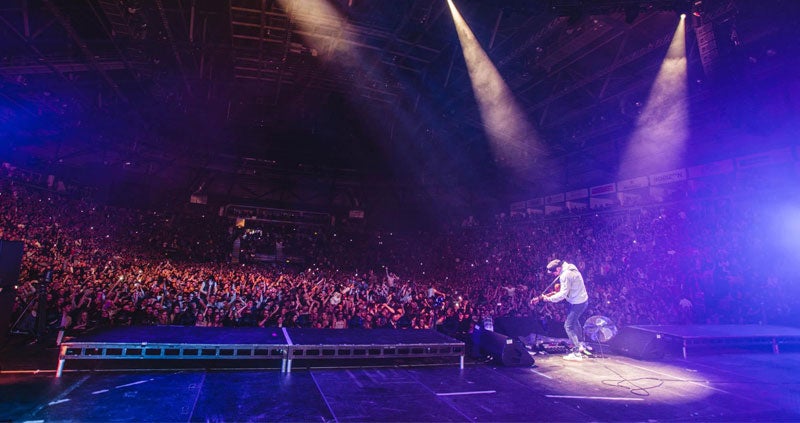 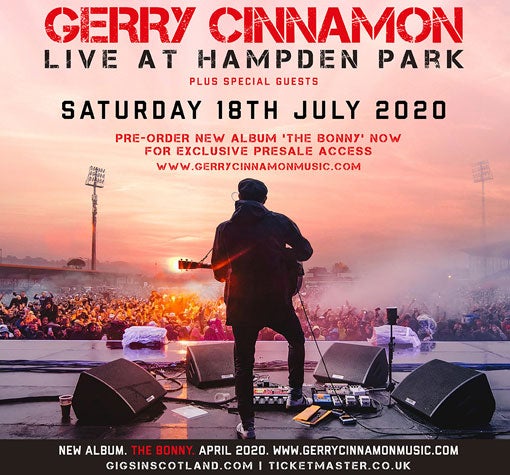 NEW ALBUM ‘THE BONNY’ TO BE RELEASED APRIL 2020

“The Glaswegian has built up a raucous following for his unvarnished acoustic anthems.” – The Guardian

“Gerry Cinnamon is our next folk hero.” – Big Issue

“His fans have the sort of feverish loyalty which can be found in very few other audiences.” – The Scotsman

Part-way through his UK and Ireland arena tour that has seen him sell 125,000 tickets in advance, Gerry Cinnamon again raises the bar by announcing his biggest headline show to date. Gerry will play a 50,000+ capacity show at Hampden Park, Scotland’s national football stadium, on July 18th. He follows iconic names such as The Rolling Stones, Coldplay, Oasis and Bruce Springsteen.

But that’s not all. Gerry also today reveals that he’ll release his eagerly anticipated second album ‘The Bonny’ on April 10th on his own Little Runaway label. It’s the follow-up to his Top 20 debut album ‘Erratic Cinematic’, which has been certified Gold in recognition of more than 125,000 sales. He’s already exceeded 115 million plays at Spotify, including the recent singles ‘Dark Days’ and ‘Sun Queen’.

“Hampden Park in the sunshine. New album under my belt. We’ll have that place rocking easy,” says Gerry.

Fans who pre-order ‘The Bonny’ from his store here will receive access to a pre-sale for tickets to the Hampden Park show. The ticket pre-sale opens at 9am on Wednesday November 13th and remains open until the general sale commences at 9am on Friday November 15th.

Gerry’s current tour includes two homecoming shows at The SSE Hydro . This summer has already seen Gerry make an impact far beyond what would normally be expected from an independent artist. His Glastonbury set saw the John Peel Stage rammed to capacity, with fans spread out far beyond the confines of the tent. And back home in Glasgow, he co-headlined the TRNSMT Festival alongside Stormzy. Such unforgettable scenes resulted in him winning Best Live Act at the AIM Independent Music Awards, an accolade that was decided by a public vote.

Everything that Gerry has achieved has been done entirely independently via his own label Little Runaway. It’s the result of making a connection with fans in the purest way. His songs tell relatable stories which have captured the imagination of audiences up and down the country. Gerry makes a habit of whipping the audience into a frenzy which sees them leaving on a high and wanting more.

Gerry has just released two brand new tracks. ‘Sun Queen’ went straight to #1 on the Official Vinyl Singles Chart and exudes the traits that have earned Gerry his phenomenal status.  The melody is strident and direct, and sure to be a huge sing-a-long moment of his future live shows. The follow-up, ‘Dark Days’, captures Gerry’s gift for writing emotionally intimate songs that immediately resonate with huge audiences. That contrast is also in play with the lyrics, which celebrate the power of love as a force of hope in troubled times.

Gerry’s forthcoming UK tour dates are below. His debut headline shows in Sydney and Melbourne sold out the day they went on sale. He will also play three sold-out shows in Australia as special guest to Liam Gallagher.

1. Tickets limited to 4 per person.
2. Surname of lead booker printed on each ticket. To gain admission, the attendee must bring valid photo ID matching the customer surname on the booking confirmation.
3. The only places that tickets can be re-sold to another customer for entry to the show is through Ticketmaster’s Fan-Fan Ticket Exchange, at face value or less.
4. The event ticket is a personal, revocable license and, at all times, remains the property of the Promoters. This ticket must be surrendered to the Promoters upon request.
5. The event ticket is sold by the Promoters directly to the Consumer. Any tickets purchased by business or traders in breach of the T&Cs of Ticket Sale may be cancelled.
6. The event ticket will IMMEDIATELY BECOME INVALID if resold OR OFFERED FOR SALE unless the sale is through our official face-value resale partners.
7. If you purchase more than one ticket, your guest(s) must be with you at the time of entry or will be refused entry.
Full FAQ’s can be found HERE.