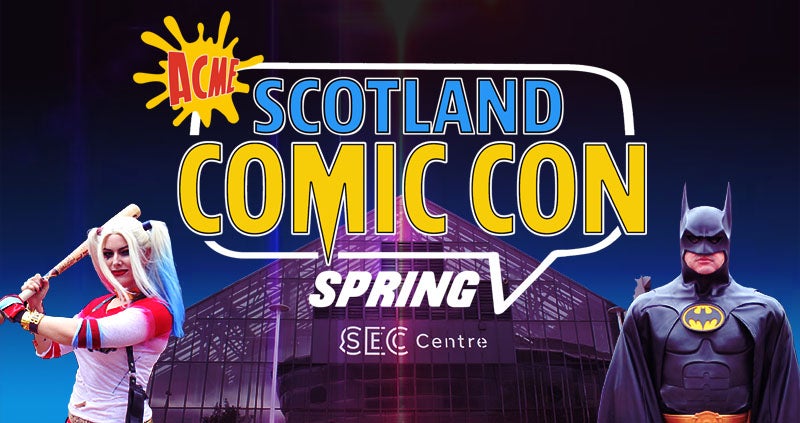 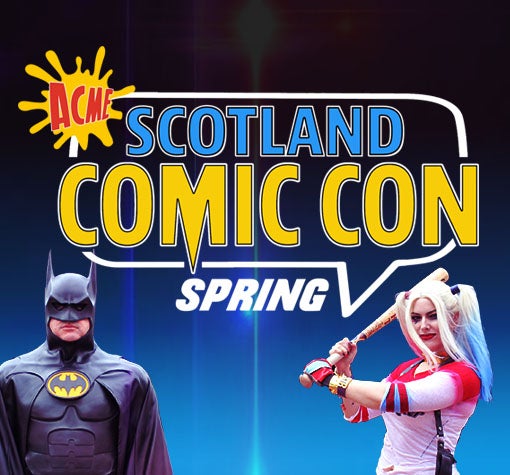 ACME Comic Con is set to welcome fans to Glasgow’s SEC Centre for the first time since MCM’s last convention in 2019.

ACME Scotland Comic Con is thrilled to announce the return of not one but two Comic Cons, set to take over Glasgow’s SEC Centre in both Spring and Autumn, taking over from MCM who have run the con in previous years. The first, in March 2022, will be scaled back with restrictions in place, with the full scale extravaganza that fans have come to know and love returning in September 2022.

The two jam-packed showstoppers will allow fans to meet their favourite TV, film and comic book stars, discover new talent in the Artists Alley, take all the photo ops they want on Geek Street with an array of props for fans of all genres, sit back and enjoy panels, or just relax with friends, family and fellow fans. The programme and line-up will be announced in due course.

Glasgow has been host to movie sets for various blockbuster film franchises, from Batman, The Flash, Indiana Jones and more, with The Avengers also heading over to Scotland’s shores for Infinity War and Endgame in recent years. The cultural draw of the country, and Glasgow in particular, is only growing, and so it remains the perfect home to celebrate fandom in all its many forms.

Scotland Comic Con aims to welcome over 10,000 fans to Glasgow for the first scaled back show in March 2022, and ramp it up with over 25,000 fans attending in September weekend - making Glasgow the main choice and capital of comic fandom in Scotland.

ACME will be taking over running of the national convention from MCM Comic Con, and brings together years of experience running the premier comics and fan events across the country, including Glasgow Comic Con - Rai Con - the Anime and Manga convention - and more, under one events umbrella. The ACME team is led by David Bell, renowned anime and gaming specialist, and Sha Nazir, who runs the critically acclaimed graphic novel publisher BHP Comics. Combined, they have produced over 25 fan cons and are proud to bring ACME Scotland Comic Con to a national level.

ACME Comic Con will be providing an array of unique, creative and engaging fan experiences to enjoy, whether passions are the Marvel Cinematic Universe, TV, comics, sci-fi, anime, gaming, manga, wrestling or cosplay - they’ve got you covered!

The events are built with the fans in mind and - after two years of many event cancellations and postponements - now is the time to look ahead have something to look forward to in the 2022 calendar.

ACME share the passion for fandom, and these two events will mark the long-awaited return to comic cons, making Glasgow the heart of the convention once more.