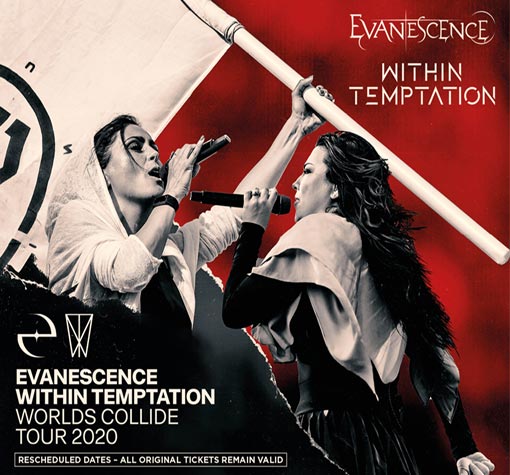 Evanescence and Within Temptation are pleased to announce they have rescheduled their highly anticipated co-headline ‘Worlds Collide’ European tour.

The European arena tour that was originally due to kick off on this weekend will now move to September. All existing tickets & VIP packages will remain valid for the rescheduled dates and all venues remain the same - except for Hamburg & Frankfurt.  The Hamburg show will move to the Barclaycard Arena; all tickets will be honoured at the new venue & extra tickets to this show will be on sale immediately. We expect to have an update on Frankfurt shortly.

Evanescence are currently in the studio working on a brand new album, and will be releasing the first offering from it this month.

Within Temptation is working on brand new music which will be released in the near future to coincide with the new tour dates.